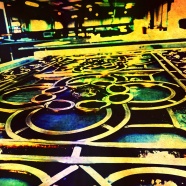 Usually when I’m writing about glass on this site I’m talking about Philip Glass but today I wanted to share mostly some photos and also few words about one of the things I’ve been up to for the past year. I’ve been learning to repair and restore stained glass windows as part of the Manchester Town Hall restoration project. I’ve been working there for just over a year and while I still have a lot to learn, I wanted to show off some of the things on which I’ve worked.

Basically what we do at the Town Hall is assess what damage the windows have sustained over the years, photograph them, removed them, and then ship them over to our workshop in Trafford Park. Once the windows are there, we take them apart, removing all of the old lead and cleaning the individual glass quarries. Then we rebuild them (hopefully) back to their original size and standard with new lead and fresh cement. Once that’s finished, the panels are sent back over to the Town Hall to be reinstalled.

Here are some photos of panels that I’ve made recently.

I’ve also worked on some of the reinstallations, learning how to point windows with mastic and also install them into metal frames using casement putty. Here are a couple of photos of windows that I’ve reinstalled. In the picture on the bottom you’ll notice a lot of mastic on the ground below the window. This stuff is basically just sand and linseed oil and it has the consistency of good sand castle making sand so getting it to stick upside down (in the top of the circle and the points of the arches) in a very even and pretty way is challenging!

The building that I’m working in is the Manchester Town Hall, which was built in the Victorian era and is widely regarded as one of the finest examples of Neo-Gothic architecture in Europe. It is a grade-I listed building designed by Alfred Waterhouse and completed in 1877. It is truly stunning, even in its current state as a building site. Every aspect of the building is ornamented to an incredible degree and built with such care. It was built to show off the wealth and power that had come to Manchester as a result of the industrial revolution being born here. It was a bit nerve racking at first to take a hammer and chisel to such an iconic building but quite satisfying to know that windows I’ve made and installed will be on view for decades to come.

I feature quite prominently (and I think hilariously) in an episode of the show Great British Landmark Fixers, on the Yesterdays network about the Town Hall Project. I do a little speaking and a little bit of demonstration in the show but more importantly, there is really great footage and information about the history of the Town Hall. If you’re interested (and in the UK) you can watch it here.

Here are a few photos of the Town Hall.

Anyway, that’s what I’ve been up to for the past year. I’m really enjoying the work and hope you’ve enjoyed a little peek into it!