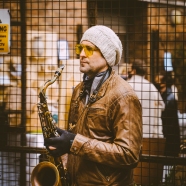 Stardust: Meditations on Mental Resilience During the Pandemic

I am not a musician. I am not anything, other than a collection of a few trillion atoms bound together by natural laws which I, naturally do not understand. Rather than defining myself as “a musician” and making that identity the core of my being, I understand myself to be someone who plays music. I also write, run, and drink, yet I have never felt the urge to define myself as a writer, runner, or drinker.

The problem with defining our essential beings as musicians (or anything really) is that if we are not able to do that thing, it creates an immense amount of inner turmoil and self-doubt. The coronavirus pandemic has been difficult for everyone. For musicians, it’s meant basically losing all forms of income and no governmental assistance. We do a thing that is universally loved yet chronically under-supported; but that’s the topic for another article. The saddest part of the pandemic for me has been seeing so many friends and colleagues feeling like they’ve lost their sense of identity because they can’t do the thing which is so central to how they identify themselves. My hot take: this is an unhealthy way to define oneself and years of this seemingly harmless way of thinking has left many musicians unable to cope with the current situation.

Of course it’s fine to miss playing out, to miss seeing the guys in the band, and to miss the thrill of the live stage. For most of us, those things are truly irreplaceable, but does their absence need to cause such heartache and such existential dread? I’m not saying that the current situation isn’t horrible and that our culture isn’t being decimated by the potential failures of so many cultural organizations, performing bodies, and venues, I’m making a case for individual resiliency through grounded mental wellbeing.

Stephen Fry said that “…you can be imprisoned if you think of yourself as a noun.” I take that to mean that one can create a serious and dangerous amount of inner turmoil if one finds oneself in the position of an actor who doesn’t act, for example. Conversely, thinking of oneself in terms of a verb doesn’t have this self-identifying quality. “I play music” can simply become, “I’m not playing right now.” It doesn’t suggest that I’m not what I say I am or that my identity is somehow flawed and fraudulent, it’s simply a description of what I happen to be doing at that moment. By making that subtle shift in our thinking, we can release a lot of the pressure of the current moment and build a more resilient approach to life. Yes, the struggle is real, and yes we will have money problems, but let’s approach them from a place of calm and mental soundness.

I believe that the bulk of goofy live-streamed concerts, bedroom jams, Patreon, the push for ultra-low latency software for online collaboration, and the myriad of other ways we’re trying to shoehorn live music into the digital space is more a reflection of our shared feeling of lost identity than a realistic method to keep our careers going. I think that for many of us, soberly evaluating whether these formats make us happy, healthy, and financially solvent might be the beginning to brighter chapters. Perhaps we can use this crisis to make positive changes to our own lives, as well as our industry.

I, for one, do not need the validation of someone seeing me play in a bar to know that I play music. I love doing that and can’t wait to do it again, but I’m not going to melt down over it. I wish that some of my friends and colleagues could get the sense of relief that comes with simply letting go. I want to say to them,”lower your expectations, just for a minute. Just try it. It doesn’t mean that you will be fundamentally changed or ruined forever.” There is a metaphor for life that comes from sailing that I just adore. When the ship is about to capsize, simply let go. When you let go of the rudder of a sailboat, it automatically turns into the wind and rights itself immediately. The musicians I see who are really struggling with existential questions right now, and who are acting out through increasingly frequent, and most likely increasingly unprofitable live streams, might really benefit from just “letting go” for a minute. Let the ship level out, chart a new course; don’t tie yourself to the wheel like some deranged ancient mariner bent on going down with the ship.

It’s hard to get to the point in life where you can legitimately say that you are a working musician. I mean the point where you are paying your bills pretty much only through performing. Most people will never be able to do that, and so it’s hard to accept that you’ve been forced to give that up by forces beyond your control. Also, it’s just fun to say you’re a musician, right? We can wake up late because we work nights, there’s a certain amount of mystic about what we do. All that stuff is fun, but I’m not really sure it’s all that healthy. Despite what the internet memes say, I just don’t believe that we’re fundamentally different from the rest of society. Just because we work in creative arts and entertainment industries doesn’t mean we can’t be adaptable, reliable, logical, and all of the other things that “creatives” are not supposed to be.

Many of us got into this line of work because we wanted a certain sense of freedom. We didn’t want nine-to-five careers as bankers or engineers. I fully believe that careers are a thing of the past and that the modern way of multiple streams of income is a safer and more fulfilling way to live. Let’s embrace that sense of freedom that comes with not being tied to a 40-hour-a-week job and be multifaceted. Let’s do many verbs, and not focus on being one single noun; let’s find meaning in all aspects of life.

Now, you might be thinking, “surely there won’t be another pandemic in my lifetime. I can just go back to my normal way of being when this is all over.” That is hopefully true, but beside the point. There are many things in life which may keep us from playing regularly. Illness, old age, moving to a small town, the birth of a child, an injury, some unforeseen technological advance, a war; could one of these relatively common occurrences rattle your existence to the core? I sincerely hope that you find the resilience to say “no,” AND that your musical practice is satisfying and fulfilling. We’re all basically just stardust…