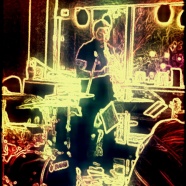 This week I had the good fortune of doing three great shows of my own original music in three different locations across Ohio and Indiana. I did One Way, at the Go Factory in Cleveland, a recital performance at the NASA convention in Ft Wayne, IN, and a full program of my music at the General in South Bend, IN.

The first performance was at the Go Factory on the West Side of Cleveland for their monthly series called One Way. This was actually the 10th anniversary of the series, and it’s been almost ten years since I’ve been in there. This series brings in all sorts of people to perform but is focused mainly on improvisation and the freer of the jazz’s. I played a program of 4 originals, Forever Bright, Northern Stomp, Most Magical Night, and Aeolian Reeds. This is a really great place to play, the acoustics are well-suited for live instruments and the audiences really come to listen. Since the room was very quiet and attentive I was able to really play with the softer dynamics and let phrases disappear into the aether. The audience was very warm and my music seemed to be well received. 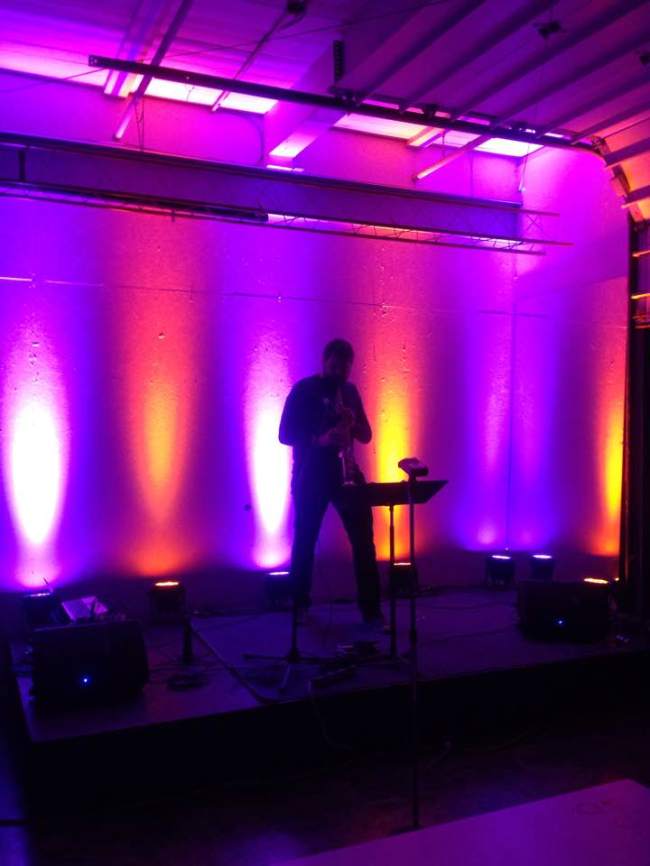 I spent all weekend at the NASA (North American Saxophone Alliance) Conference at IPFW in Fort Wayne. I performed one of my original pieces, Most Magical Night on Saturday afternoon in the main recital hall. I had a pretty nice slot on the program and had a pretty good crowd in the hall. (It’s not always easy to get people to come to your performance at these conferences.) The performance went well and I talked to a few people afterwards who had nice things to say. My piece was a maybe a little bit different to a lot of the music that was being performed at this conference because I no longer play with a traditional french setup/sound. Having said that, I still explore all of the dynamic subtleties, maintain a focused sound, and keep my intonation in check so it seems to me that we’re all doing basically the same thing, just with different colors. It was great to see some other familiar faces from the academic saxophone world and to catch up with them. I saw my main teacher, Dr. James Umble perform a few times as well as give two seminars, which was a real treat for me. 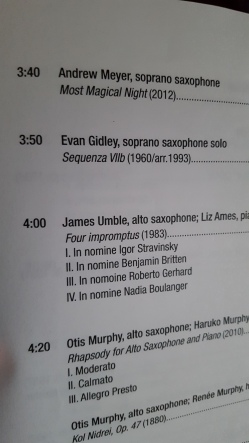 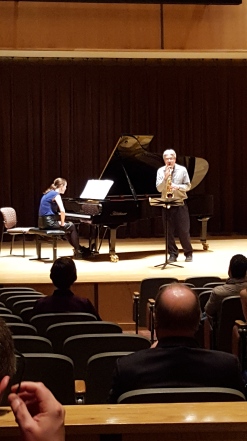 My other goal for this conference was to find some new music to play. I was specifically looking for new, electro-acoustic works to add to my repertoire. While I did find a few things that I like (I have a pretty specific set of criteria that I’m looking for) in general I was a bit unimpressed by a lot of the music I heard at the conference. There seems to be a bit of a trend in that world toward focusing too heavily on playing new, and extremely challenging works and then discarding them and looking for newer and more challenging works. It seems to me that some people will just play anything as long as it’s new and sounds ‘weird,’ regardless of wether it’s actually a good piece or not. Aside from these few things, I really enjoyed the conference and found some new composers and pieces to pursue. 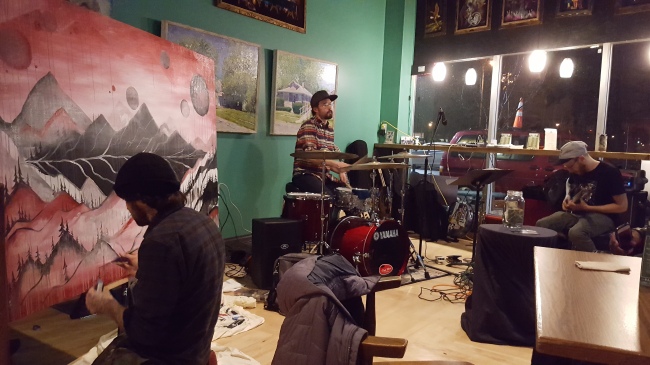 The show at the General in South Bend, IN turned out to be a lot better than I was expecting. I was planning to not play two of the unaccompanied pieces that I’ve been performing recently just because the crowd was a little noisier than I’ve been playing for recently but at the last minute I decided to play them anyway. I’m glad I did. The audience responded really well, getting very quiet, which made the pieces feel like they had more power than normal. Quite a contrast to playing in the recital hall a couple of days before. Aside from those two pieces (Forever Bright and Most Magical Night) I played three other pieces of mine with tape. (Northern Stomp, Blood Den, and Aeolian Reeds) I cranked up the volume a little more than I usually would for these, which was fun. 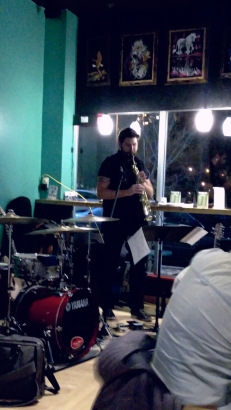 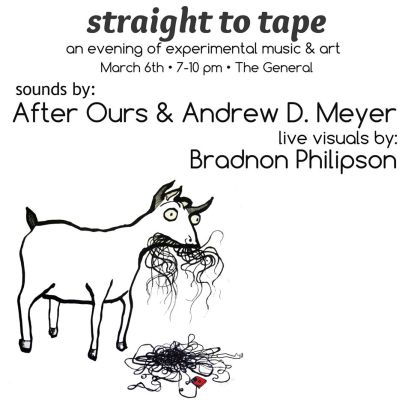 Also on this bill, my old friends and bandmates from Sobriquet days, Eli and Arthur. They’re playing in a duo now called After Ours, which sounds great. Very grooving, loosely improvised music. Eli plays a hybrid guitar with a couple of bass strings and uses more technology than the space shuttle to produce a pretty thick wall of pulsing, shimmering, and throbbing textures in combination with his bass lines, and solo lines. After their portion of the show, I joined with them to play Nirvana’s ‘Heart-Shaped Box’, Antonio Carlos Jobim’s ‘Look to the Sky,’ and a couple of other original tunes. In addition to the music, Bradnon, Philips painted a huge canvas in just 3 short hours that turned out really great. 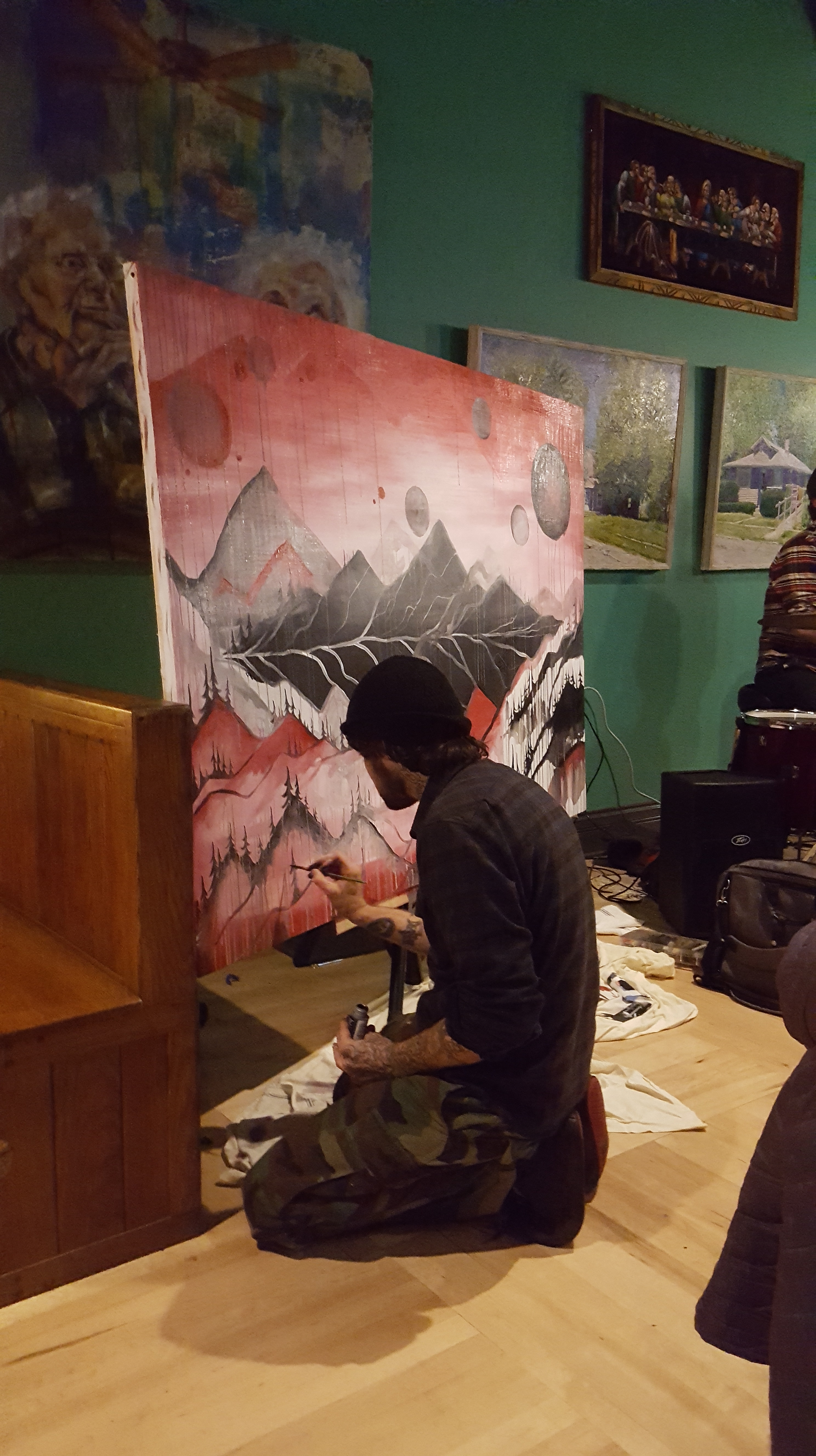