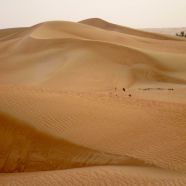 I’ve been meaning to post something about Dubai for a couple of weeks now but haven’t gotten around to it. Currently I’m waiting in the Singapore airport so…no time like the present…

How do you begin to describe the city of Dubai? I’ve just spent three days there, which admittedly is not enough time to really understand it, but it’s a start. This massive metropolis is many things, often contradictory, and built on an unimaginable scale. Flashy yet conservative, brand new with ancient traditions, Dubai is quite different from any other city I have visited. I think rather than try to describe or explain it, the best route is to have a few experiences and take a few photos then share… 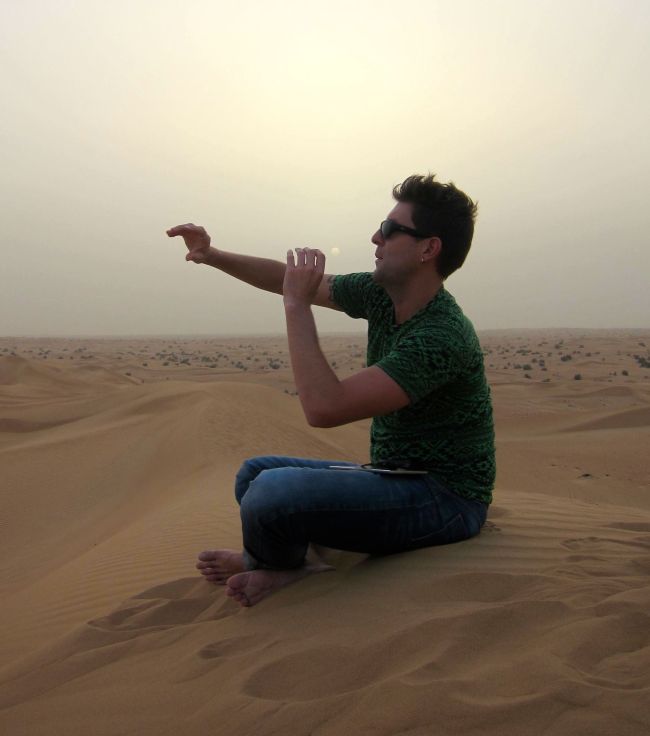 The first area of the city that I explored was Jumeriah beach. Like the entire city, this area is extremely modern. The beach is completely lined with high-rise buildings and luxury shops on the lower levels. The beach itself is wide and packed with many different peoples. There are a lot of people in western attire in this area mixing with those in traditional Arabic garb. It’s quite striking to see people in tiny, European-style swimwear next to women swimming in full burkas. This is not an exaggeration, I actually saw several woman in the water fully covered with burkas. These sorts of scenes are one of the main reasons that Dubai is so interesting, and there is no shortage of them. 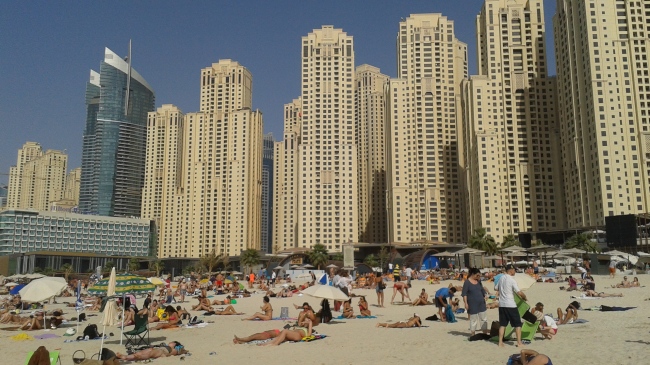 Dubai is a very conservative place when it comes to clothing. This makes for some pretty interesting fashion choices when it comes to foreigners, many of whom are notoriously unconservative. In general, when westerners come to Dubai they cover up a little more than they would at home, particularly for women. For me this meant wearing a t-shirt with sleeves when going out for the day…not really a big deal. It was pretty funny to see how other people were dealing with it; who got it, who was trying and not really succeeding, and who just plain didn’t care. I also found it really funny when I would pass a couple where the woman was wearing a full burka and the man was wearing jeans and a t-shirt with Jimmy Hendrix on it. 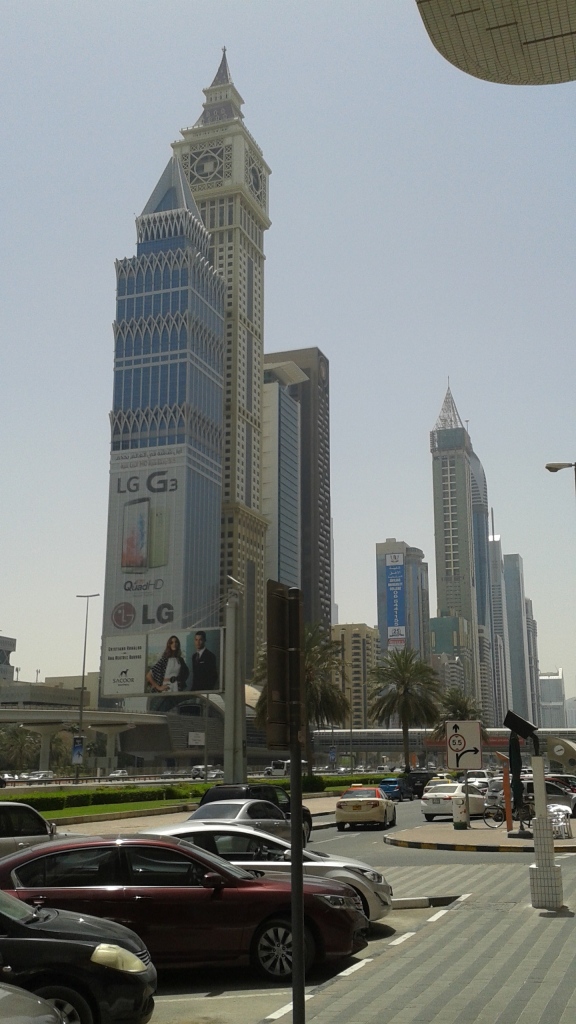 The city of Dubai is quite large and spread out. It’s a massive car culture and virtually impossible to get around without one. They do have high quality public transportation but almost everyone seems to prefer driving. Everyone seems to have a new car. Dubai is without a doubt home to some of the world’s worst drivers. Everyone insists on driving as fast as possible all of the time. They accelerate to red lights and then slam on the breaks. When going a steady speed on the highway they continuously pump the gas so that you’re constantly being jerked forward and backward. Strange Arabic music blasts out of taxi stereos and there is a lot of traffic. In general, cabbing around the city is pretty unpleasant. 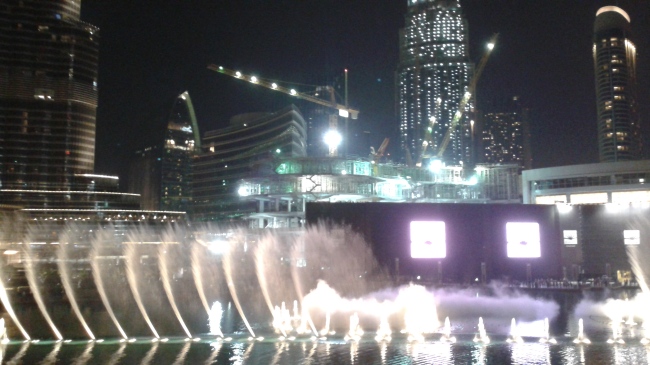 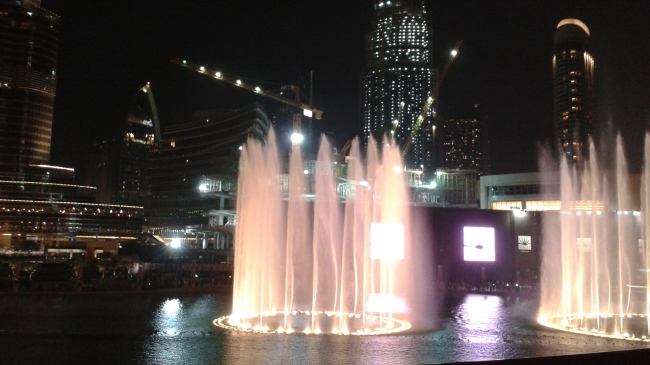 That night I had a meal with friends at a Thai restaurant overlooking the mall, and fountains. Just opposite our table was the Burj Kalifa, the tallest building in the world. This huge fountain looks more like a marina at night and there are even boats that float around in it. Every 30 minutes or so there is a spectacular show with the fountains, lights, and music. This fountain show is very impressive, with water shooting high into the air. The strange thing about it is that the soundtrack is from Aaron Copland’s ‘Rodeo.’ I think most Americans consider that piece to be a general Americana. I guess I was expecting something more local or Arabic-themed. 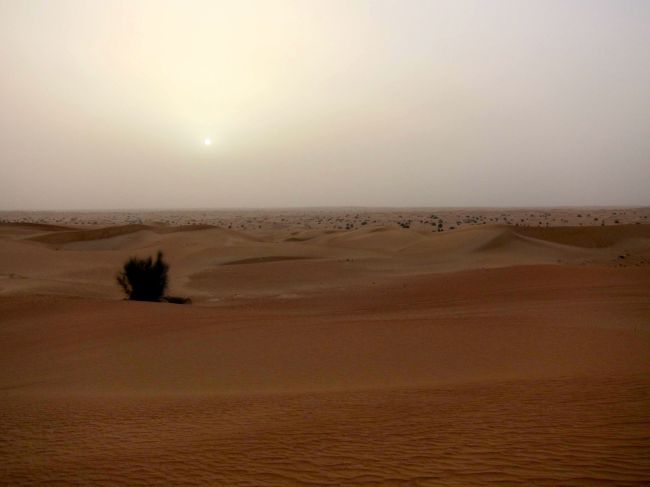 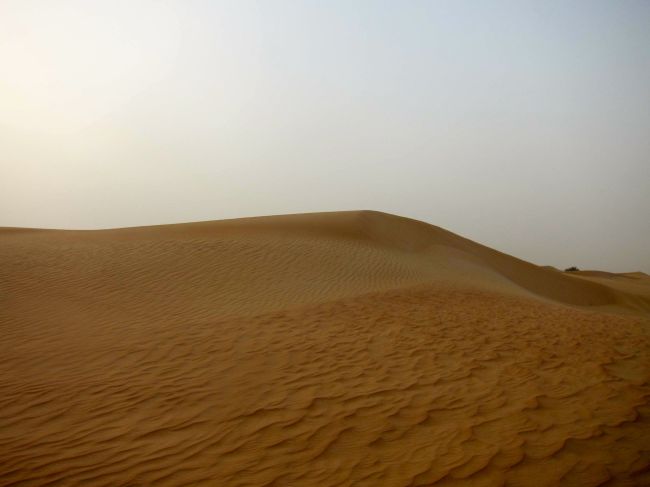 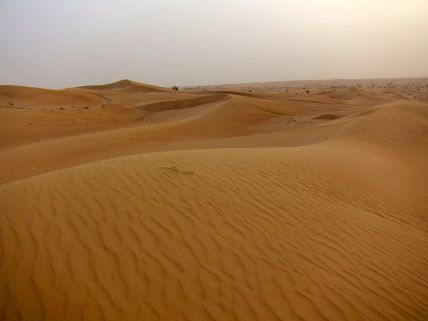 The second day I went on an excursion into the Sahara desert in four-wheel-drive vehicles to a Bedouin camp. This was by far the best prepackaged outing I have ever been on. We were picked up in 4×4 SUVs and driven out of the city and into the desert. The highway turned into a road, which turned into an unpaved road, which turned into pure sand. Our drivers took us up and down the sand dunes at really extreme angles. You can see in the pictures what the cars were doing. It’s quite extreme when you are almost vertical in a vehicle as you come over the dunes. 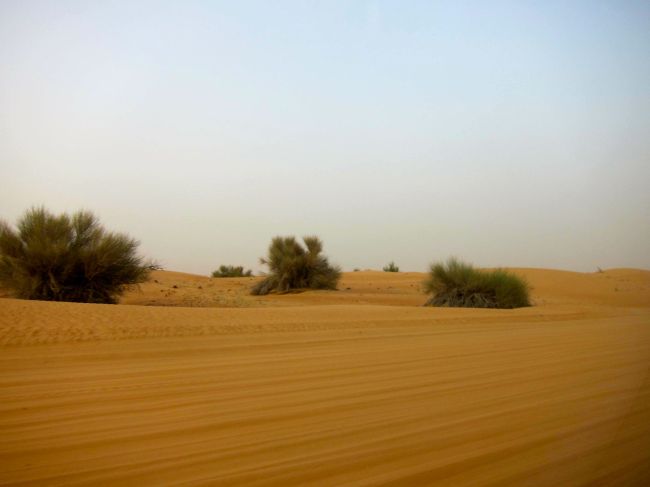 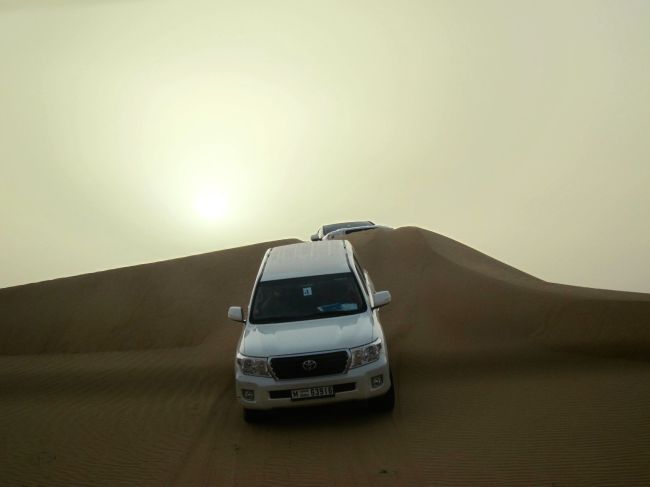 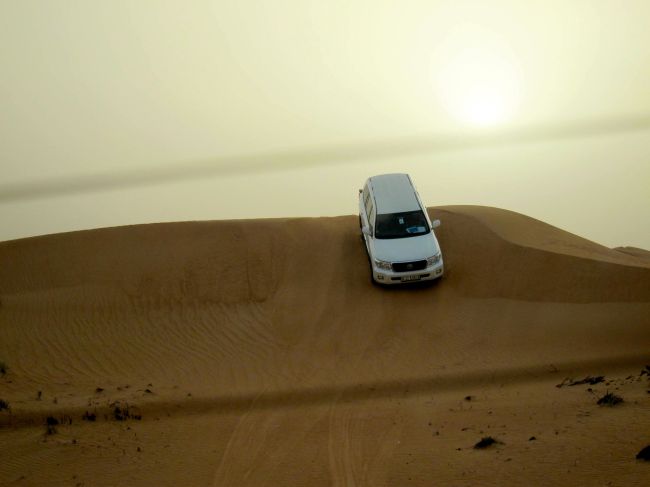 The desert is a very interesting place. At sunset, it’s warm but the sand is much warmer than the air, which cools rapidly. The air has a quality about it that is very difficult to describe. Since there is so little humidity you don’t really sweat. It’s also very quite. Despite the harsh conditions there is wildlife in the desert and we spotted a few desert dwellers on our journey. 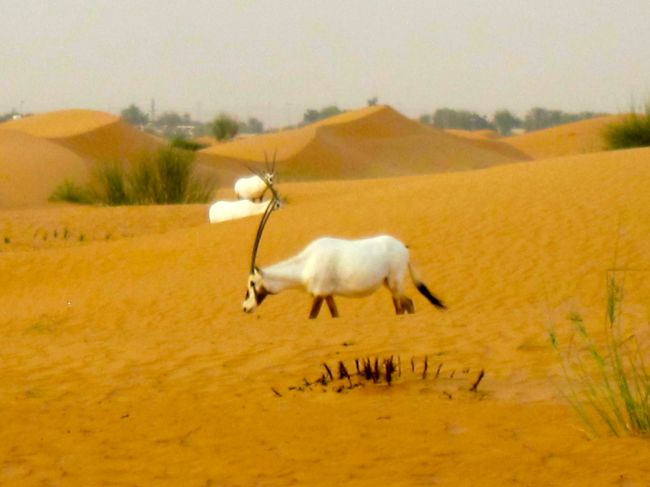 After driving through the sand dunes for quite a while and making a few stops to take photos, roll down the hills, and meet some camels, we arrived at our destination, a recreation of a Bedouin camp. This was a massive campsite that was surrounded by wooden walls and contained several areas for serving food, many long, low tables with cushions on the ground, a shisha area, and a big carpeted stage in the middle. Outside of the camp there were rows of camels sitting on the ground, all facing the same direction like some sort of camel parking lot. 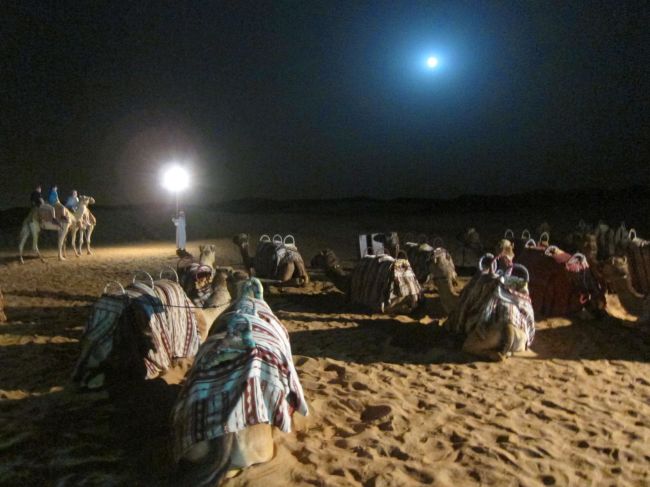 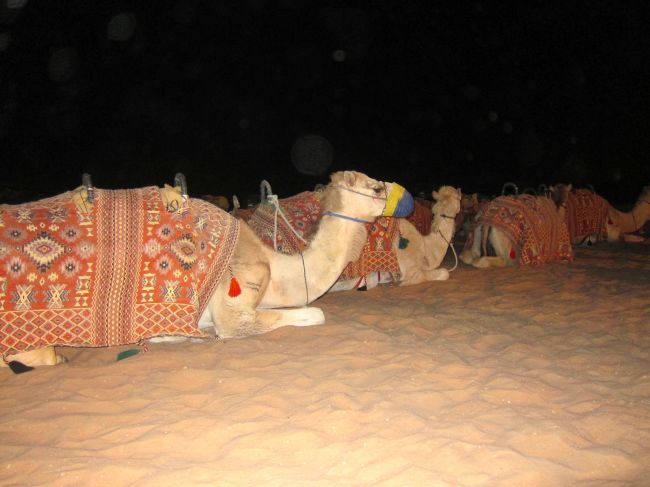 This one’s name is Sheila!

As we entered the camp we were given Arabic coffee and dates that were exceptionally fresh and tasty. We then proceeded to claim an area at the end of one of many long tables. Everyone sits around them on low cushions on the ground. What made this tour so incredible, aside from the stunning surroundings was that everything was truly included. We were served a huge meal with appetizers and desert. Shisha was available and included in the package as was free flow wine, beer, and soft drinks. This last part was particularly surprising since alcohol is extremely regulated in the city. You can only really find alcoholic beverages behind closed doors in the big hotels in the city. Out in the desert however, anything goes apparently! This was much better than other tours I’ve been on where they give you a couple of watery welcome drinks and try to charge you for every activity you want to do. None of that here. 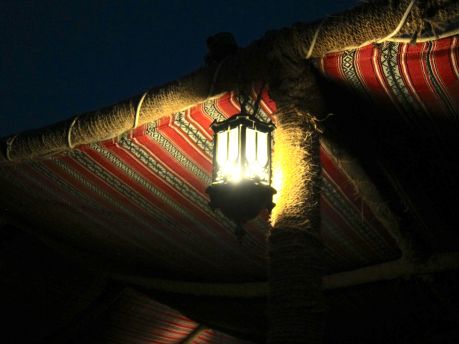 The sun set and it became clear that they had put lights behind the massive sand dune adjacent to the camp. This created a glowing effect that made for a striking background. An announcement was made that they were beginning to serve the first course. We wandered around barefoot in the sand to sample falafel, a variety of flatbreads with different condiments, and other fried things. There were big selections of humus, tabouleh, olives, and breads. Curried vegetables and grilled meats were served for the mains. In between courses we shuffled around to henna tattoo artists and smoke shisha while sitting in big circles on more low cushions. 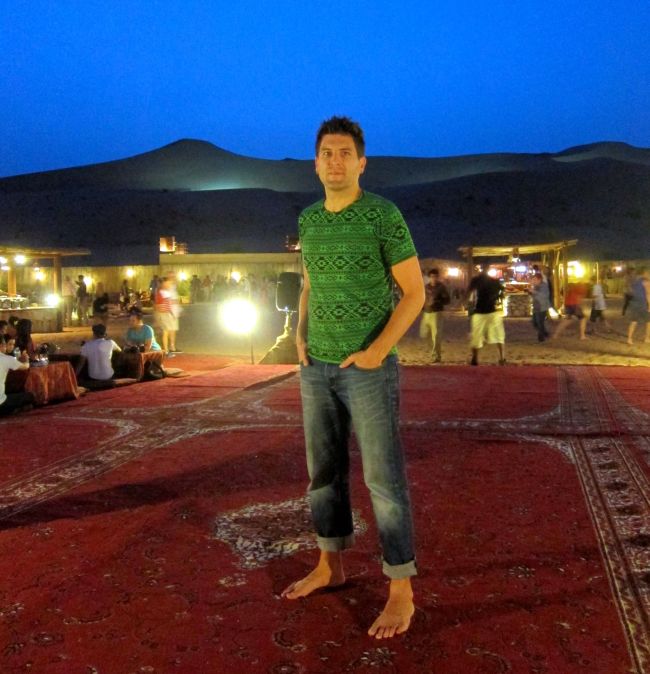 Later on in the evening, after everyone had stuffed themselves, there was a belly dance show on the stage that was surrounded by the tables. I don’t really know very much about belly dancing and I don’t think that most of the crowd did either but it was a lot of fun. The crowed roared anytime she did something fast or particularly showy. 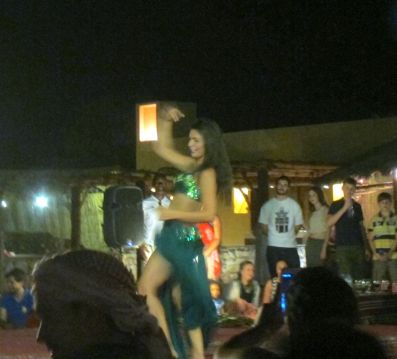 On the third and final day in Dubai, I went to the old souk or market area. This souk is one of the stranger things I experienced in Dubai. This area was where the old town was located long before the modern city was built. When they began building the new city they knocked down the old traditional markets. Later on, they realized that the newly created city didn’t really have any traditional Arabic culture, so they rebuilt the market where it was originally and designed it to look old and traditional. In this area there are old wooden boats that are being loaded with toaster ovens, refrigerators, tires, and other goods, that will then be taken to Iran, Iraq, and other Middle Eastern nations. 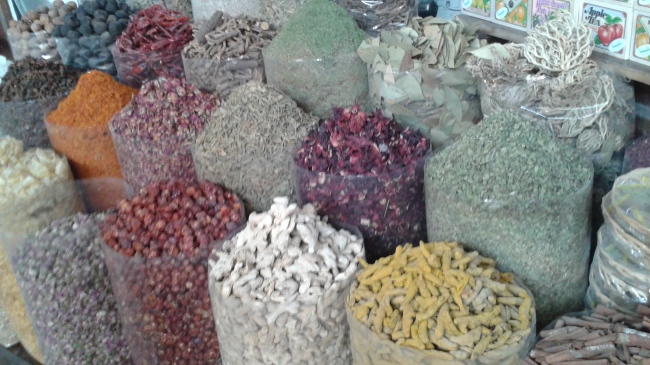 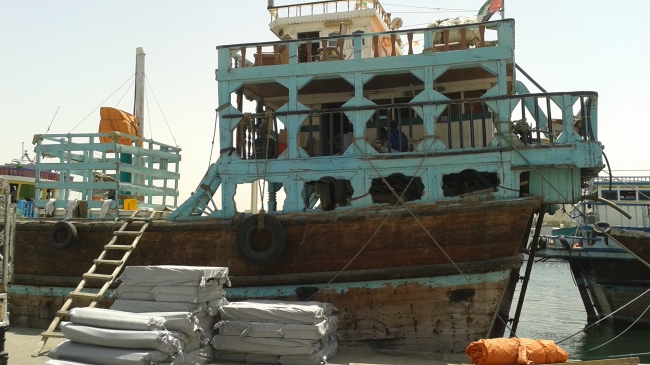 The market is a good metaphor for the city at large. While the city is enormous, full of incredible architecture, and incredibly fast paced, there are no traditional areas. It’s a totally synthetic city. Highly planned and organized, there really is no reason for it to exist where it is, in the middle of the desert. I’m glad it does though!