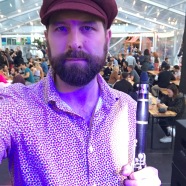 Two very different dates with the band this week. The first was an afternoon benefit performance in Altrincham for the Music Place, which is a community music education center for kids. It was held at a pretty interesting place called Stutter and Twitch. This record label/coffee shop/record shop/cocktail and beer spot has a little stage and table set up in a shopping precinct in Altrincham. I had to check the directions twice because it seemed odd to be playing jazz right next to a WH Smith, but it turns out it’s a great little spot. There were some kids from the music school playing tunes by Roy Hargrove, Chic Corea, and others beforehand, which was a great surprise. We did one set for a nice and attentive audience which was a total pleasure.

The second gig of the day was a sort of headline slot at the Manchester Food and Drink Festival. There were a lot of people in attendance, all under a clear clastic roof, a bit like a train station. Unfortunately this made the environment quite loud. We were playing on a stage made for a rock band, which is always a hilarious set up for an acoustic jazz band. We made the most of it with a couple of high energy, hard swinging sets that I think people ultimately enjoyed. The bar staff were very appreciative…I imagine they were probably subjected to 30 different versions of acoustic guitar dudes playing Wonderwall throughout the day so they were quite pleased to hear something a bit different!