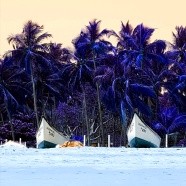 Those who know me personally know that I have a deep affinity for the music of Terry Riley, particularly his early compositions where he’s playing saxophone and/or keyboards. (Reed Streams, Poppy Nogood and the Phantom Band, Shri Camel, Rainbow in Curved Air, Descending Moonshine Dervishes, etc.) Just today I’ve finished the first in a series of recordings to come which are heavily indebted to this music. It’s called Goa Variations. As of now, I’ve written five parts in total and am looking to keep writing them for the foreseeable future. In that sense, I’m intending them to be like an open set of variations. This music is intended to be performed live, which I have done several times over the past year. In performance, I use four sequencers, a bit of fixed media, and play the saxophone lines at the same time. It’s always different in performance so this recording is more of just a document of where the music is “this week.” This recording is just the first part. I hope you’ll have a listen!