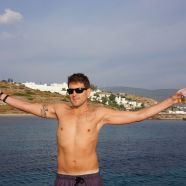 Interior Decorating from the Homeless Man

Posted by Andrew D Meyer on January 4, 2014 in Non-musical activities!!! | Leave a comment

So i’ve recently picked up a new writing job. I’m writing stuff for the internet and i’m not really sure where it get’s published. I assume it’s basically filling space between advertising. The funniest part is that I am far from an expert on the topics that I write about. Mostly I write about interior decorating, kitchen design, and popular colors for house painting in 2014. This is especially hilarious since I am basically homeless. When in town I crash at my parents’ house for a while and then i’m back on the road. I’m becoming an authority on home decorating and design without ever owning one!

Yesterday I wrote a bunch of stuff about divorce law and retirement planning. I hope that it is useful to someone, though I would double check the facts with a qualified attorney before following any of my own advice. Basically when i’m assigned a topic I do a small amount of research on the internet and then regurgitate what i’ve read in a hopefully original voice. I’m assuming the sources I read aren’t just other people like me making stuff up as they go!

I guess it’s good advice not to believe everything you read on the internet!