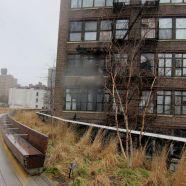 The High Line is an elevated park on the west side of Manhattan that has been built from a repurposed rail line. This section of track was built in the 1930’s to lift trains up from the street level to avoid creating dangerous intersections with high-speed trains in what was then the city’s largest industrial zone. Before the high line was built there were so many accidents involving trains that 10th avenue took on the nickname ‘death avenue.’ They even had dudes riding around on horses waving red flags called west side cowboys trying to get people out of the way of the trains.

The view up 10th ave, formerly known as ‘Death Avenue.’

These trains carried in food products and raw manufacturing items that were critical for the city. In order to make this process safer, the high line was created as part of the West Side Improvement Project. Unlike many above ground subways, the high line was designed to go through blocks and weave around buildings rather than go above the street which would essentially block out the sun for residents. This design also meant that trains could pull straight up to buildings on the 3rd level or so and unload directly into warehouses and factories. As trucking increased through the 1950’s the high line saw a sharp decrease in traffic and in 1980 the last train to ever run along this route carried in a load of frozen turkeys.

As with all things that are left abandoned, nature reclaimed the disused tracks. They sat unused for almost 20 years and avoided demolition largely thanks to community activists who went to court to challenge demolition plans. Then throughout the 2000’s plans were made and the park was actually built. Now residents and tourists alike can walk through the former railway and get a unique perspective on the city.

There are many places along the park to stop and view the city. Many of these have seating, artwork, or other diversions. In one place there is a projector permanently mounted to show short films on the wall of an adjacent building.

Even on a gray day like this there are some pretty spectacular colors to be seen along the way.

The High Line also offers some cool views of the Hudson between the buildings. It was especially spooky looking this day with all the fog rolling in.